The Elder Scrolls Online News: Witches Festival Is To Start Oct. 20, XP Boosts and Halloween-Themed Items Will Be Available 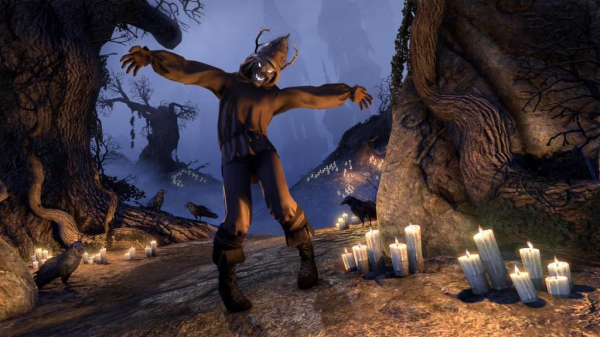 This time of the year features all kinds of games coming out with Halloween-themed festivities, and “The Elder Scrolls Online” is no exception. For those who will be spending the Halloween season in Tamriel, they will be able to participate in the event known as “The Witches Festival”.

The festival will start on Oct. 20, and once it goes live, players may need to do a few things in order to really go into the swing of things. Detailed in a recent post on the game’s official website, players will first need to get to the Crown Store and get the Crow Caller item. They will then have to finish “The Witchmother’s Bargain” quest to acquire the Witchmother’s Whistle and use that to summon the Witchmother’s Cauldron.

Once the Witchmother’s Cauldron has been summoned. Players can use it to gain a 100 percent XP boost that will last for two hours. They can also polymorph their characters into their undead forms. Notably, if “Elder Scrolls Online” players took part in the festival last year and already have the Witchmother’s Whistle, they can then just skip the first steps and proceed to summoning the cauldron right away.

Aside from the XP boost and the polymorph option, players will also be able to acquire several Halloween-themed items during “The Witches Festival.” Different masks and recipes perfect for the scariest of days are going to be up for grabs, and there is also a Zombie Horse mount that will be added to the Crown Store. Virsale will provide huge teso gold for all players.

The Witches Festival will remain active inside “The Elder Scrolls Online” until Nov. 1.

Boost Your XP and Transform into the Undead

To participate in the festivities, follow the steps below:

In addition to the XP buff, throughout the festival you can earn some Witches Festival-themed loot by helping to keep Tamriel's numerous monsters at bay.

During the event, all boss monsters (such as World Bosses or those found defending Delves, Group Dungeons, Public Dungeons, Trials, Arenas, and Dark Anchors) will drop Plunder Skulls. You do not need the XP buff or the undead polymorph active in order for them to drop.

Plunder Skulls are special containers that have a chance to contain the following rare items:

A host of supernatural selections will also be added to the in-game Crown Store during the event period, including the Zombie Horse mount, the Nightmare Daemon Mask Pack, and much more. Don't miss your chance to grab some of these unique and terrifying items!

You can see a complete list of all Crown Store items exclusively available during this spooky celebration in our showcase article.

Conjure Spirits in a Unique Home

Need someplace to practice your unholy sorceries away from prying eyes? The Exorcised Coven Cottage will be available for purchase with crowns in the in-game Crown Store for the duration of the event, and if you earn the Witches Festival achievement “An Unsparing Harvest" you'll unlock the ability to acquire this bewitching home for in-game gold!

To unlock An Unsparing Harvest, you must earn the following event achievements:

If you had earned these achievements in a previous event, you will not need to earn them again this year. To see which achievements you've already unlocked or to track your current progress, check the Holiday section of your Achievements menu.

Be warned: You will not be able to purchase this home for crowns or gold once the event ends, so don't miss your chance to own this “haunt away from home"!